Skip to content
Homepage / Technology / Intel Core i5 vs. Core i7 buy Which processor should you?

Whether you’re building your next PC or shopping for a new computer online, one of the questions that come up from time to time is whether the Intel Core i5 or Core i7 is a better bargain. The short answer, “It depends on a several benchmarks,” isn’t all that helpful, so we’ve broken the data out in more detail and for both mobile and desktop processors. Here’s what you need to know. 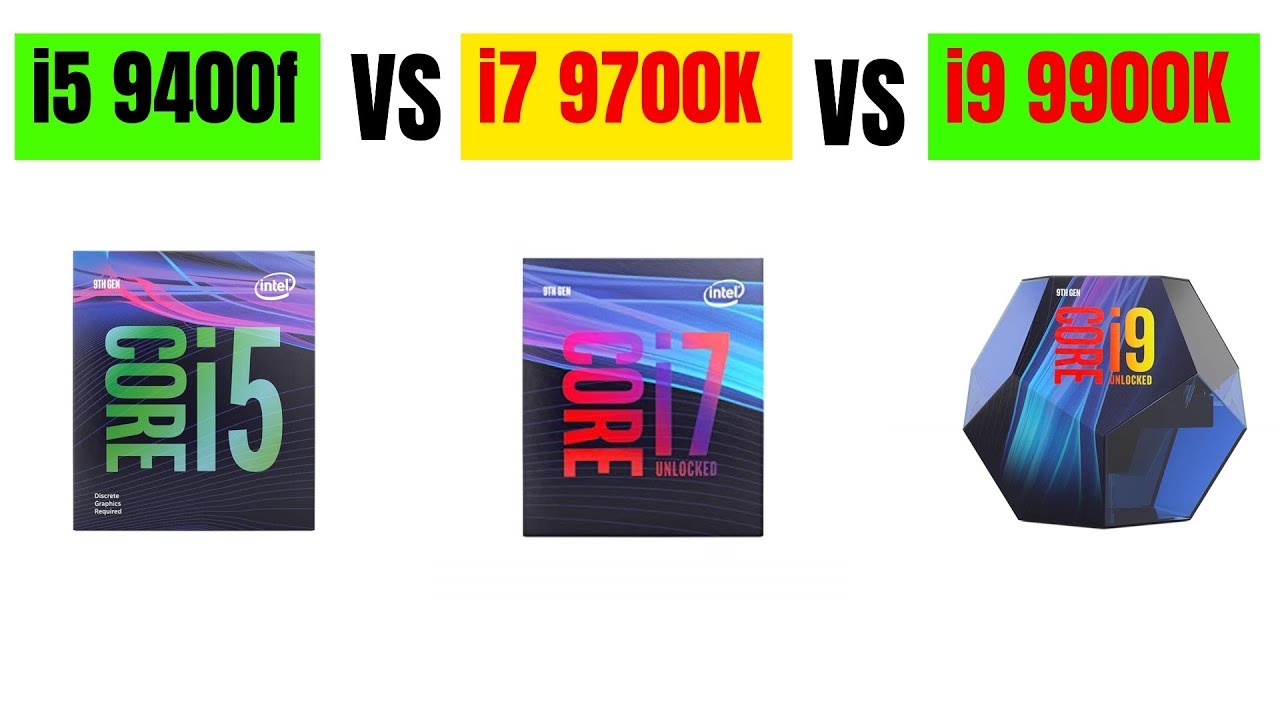 Intel’s Skylake (6th generation) differentiation and feature sets haven’t really changed much since Haswell (4th generation). The Core i7 features quad-cores with Hyper-Threading enabled and Intel’s HD Graphics 530 solution. The Core i5 family offers quad-cores without Hyper-Threading, and either HD Graphics 530 or 510 GPUs. Most people, including gamers, should be fine with a Core i5 desktop CPU. Core i7 chips tend to help more with engineering, video editing, audio post-production, and other tasks that require as many processor threads as possible.

For graphics, the HD Graphics 510 has 12 execution units (EUs), while the 530 has 24. Avoid the 510 in any case where you intend to do anything substantial with the GPU. But the long-standing rule of thumb remains true: No Intel chip is particularly strong in the graphics department, apart from the EDRAM-equipped Iris Pro variants (none of which exist in socketed consumer hardware). Enthusiast gamers should always opt for a discrete GPU.

One significant difference between the desktop and mobile markets (the latter of which we’ll get to below) is how Intel positions Hyper-Threading. Almost all of  Intel’s desktop Core i5 chips across the last six desktop product generations are all quad-cores without Hyper-Threading, while its Core i7 family consists of quad-cores with Hyper-Threading. (Intel’s Core i5-4570T is the single exception to this — it’s a dual-core + Hyper-Threading chip.) Older Core i5 / Core i7 chips top out at 32GB of RAM, but Skylake raises this to 64GB for both types of processor.

What about desktop PC performance?

To compare performance between the Core i5 and Core i7 families, I turned to Anandtech’s excellent CPU Bench database. While AT doesn’t have records on every chip released by Intel or AMD, they’ve got a solid selection of comparable parts. I opted to check the Core i5-4690K versus the Core i7-4770K. The 4770K has Hyper-Threading, a base frequency of 3.5GHz, can Turbo up to 3.9GHz, and has 8MB of L3 cache. The Core i5-4690K has the same clock speed, but no Hyper-Threading and just 6MB of L3 cache. That’s about as perfect a match-up as you can ask for.

The graph below was generated by comparing Core i5 and Core i7 in each and every benchmark and taking the geometric mean of the results. This diminishes the impact of outliers, though in this case, the arithmetic and geometric means are quite close to each other. I’ve split the data into three sections — general computer, gaming performance with 1x GTX 770, and gaming performance with the GTX 770 in SLI.

There are some differences in the data sets that we need to discuss. The aggregate General Purpose ratio doesn’t reflect the impact Hyper-Threading can have on various applications. There are a number of applications where Hyper-Threading makes no difference, a handful where it decreases performance (though never by more several benchmarks that show gains of 10-30%. If we set a 3% threshold for a tying score, Hyper-Threading gives the Core i7 a win in 21 out of 36 tests. It ties the Core i5 in 14 tests, and loses to it outright in just a single benchmark (x264).

In workstation and consumer CPU workloads, Hyper-Threading sometimes helps a lot, sometimes doesn’t help much, but almost never hurts. Gaming, however, is a different animal. In gaming, Hyper-Threading never offers a single performance boost, while it impacted BioShock Infinite’s minimum FPS by 11% (meaning the Core i5 outscored the i7). The net effect is a 2% performance decrease for Hyper-Threading. In SLI gaming, we see a similar pattern, though this time it’s different games that take performance hits. The minimum frame rate for Sleeping Dogs was 10% faster on the Core i5 (56 vs. 61.8) and 5% faster in BF4 (86.4 vs. 82.9).

What this means, in aggregate, is that while Hyper-Threading probably doesn’t hurt gaming in most titles, you can’t depend on it to offer a significant performance boost, either. While the above comparison uses older data from Haswell, there’s nothing about Skylake or Broadwell that changed the Core i5 / i7 comparison point. You can assume that the same metrics hold true for these chips as well — namely, that the Core i5 offers an equivalent level of performance.

AMD isn’t a formal part of this article, but since I know people will ask, I took a look at how the FX-9590 compares against the Core i5-4690K. The news is not particularly good. There are a few well-threaded benchmarks where AMD can shine, including WinRAR, x265 encoding, multi-threaded Cinebench (both 11.5 and R15) and 7zip. The FX-9590 is utterly incapable of matching the 4690K’s single-threaded performance, which means AMD loses every test that can’t scale to eight cores or is single-threaded to start with.

The gap between AMD and Intel in game benchmarks is much smaller than in general CPU performance. AMD’s FX-8350 and FX-9590 are capable of pushing perfectly acceptable frame rates. But the FX-9590 never outclasses the Core i5-4690K in any test. If you’re building a gaming box and you want to go AMD, you absolutely can — but pound for pound and watt for watt, the Core i5 wins this competition.

The Core i5 is in a similar situation:

If you’re looking at the Core M-branded Core i5, we strongly recommend doing your homework and checking reviews of specific systems. Core M systems can deliver better battery life than their i5/i7 counterparts, but this will depend on the specifics of the manufacturer. Remember, high-resolution screens and ultra-thin systems with limited battery life will cost you just as much in power savings as you can get with a lower-TDP CPU — possibly more these days, since high-end chips account for a decreasing amount of power consumption.

The other major difference we want to discuss is the newfound gap between Core i7 and i5 core counts on mobile. Prior to Skylake (6th gen), almost all Intel chips on mobile were dual-core below the Core i7 level. Now, there’s a group of Core i5 mobile parts that offer quad cores without Hyper-Threading support, as shown below:

The difference between these three cores is that one of them supports Intel’s Iris Pro Graphics, while the other two are Intel HD Graphics-only. The Iris Pro 580 is Intel’s only EDRAM-equipped 128MB  Core i5. If you want a mobile processor with top-end graphics and a quad-core CPU, this is the Core i5 you want to purchase.

More cores: Many of Intel’s Core i7 processors are quad-core chips with Hyper-Threading enabled. This isn’t universal, however, and the company does offer a few dual-core + Hyper-Threading SKUs.

Higher clocks: Intel’s dual-core mobile Core i7 chips typically have higher clock speeds than their Core i5 counterparts, even at the same TDP.

More cache: Core i7 chips carry either 6MB or 4MB of cache. Core i5 chips run the gamut here. Older chips (pre-Broadwell) often carry 3MB, while Skylake and Kaby Lake chips are sometimes 4-6MB. The extra cache has only a small impact on performance.

More addressable memory: Many older mobile Core i7 and i5 processors are limited to 16GB of memory, but there are Skylake (6th-gen) chips that support 32GB and even 64GB on some late Core i5 / i7 models. 16GB of RAM is fine for the vast majority of users. But if you think you might need more, check what your CPU is capable of at Intel’s database.

How much performance you get out of a mobile Core i5 versus a Core i7 will depend a great deal on your laptop’s cooling solution and whether the chip can handle its own heat output. We’ve previously discussed how Intel gave OEMs more freedom to define their own TDP targets and skin temperatures. But this creates scenarios in which buying a faster Core M can actually result in worse performance, as the chip hits its thermal trip point and down-throttles to keep cool.

We can’t point to specific instances where this has tilted performance between Core i5 and Core i7 chips, but it’s likely to create at least a little “slosh” between the two core families. Generally speaking, if you truly want to emphasize low power, pick the CPU that has lower base and turbo clocks. Intel historically defined TDP as “The CPU’s average power consumption when running typical workloads over a period of time.” A chip with more headroom is a chip that’ll hit its throttle point faster.

Which chip should you buy?

Right now at Newegg, Core i5 chips are running as low as $185 for the Haswell-based Core i5-4430, while the cheapest Skylake is $189 for the Core i5-6400. The Haswell is the better buy, with a 3GHz base clock, but the platform is older and you won’t be able to upgrade to a faster chip at a later date — assuming anyone still bothers. It’s a little surprising to see how much Haswell hardware is still in-channel. It’s been a year since Skylake launched and Intel normally turns its stock over fairly quickly.

The cheapest Core i7 chip, in contrast, is $295 at Newegg for the Core i7-4770S, and there’s not much to recommend the Core i7 over the Core i5 family if you want to play games or do basic desktop work. The Core i7 can be faster, but many consumer applications top out around four threads. Many have hoped that AMD’s Zen will reinvigorate this market, but until that chip formally launches we’re stuck with the product roadmap Intel offers, and the Core i5 is the better deal for most people.

Over a year ago, I wrote that DirectX 12 could offer the Core i7 a chance to prove itself, but we have yet to see that happen in the titles that have shipped to date. DirectX 11 and DX9 will remain important APIs for years to come, which means we have to wait and see which titles offer DX12 support and how it changes the Core i5-versus-Core i7 comparison.

It’s harder to make this call on mobile. Poor cooling will cripple any laptop, and some of the boutique laptops on the market are sold with CPUs that they can’t possibly keep cool. I tend to favor the Core i5 over the Core i7 for mobile gaming because it helps preserve battery life and still offers good overall performance. CPU choice is just one element of a laptop — just be aware that higher-end CPUs may not deliver much of their expected performance if the chassis isn’t well designed for the chip it’s carrying.

If you’re considering a laptop with a Kaby Lake or Skylake chip, as opposed to something older, I’d tend to go for the platform with the newest components and lower-resolution display if you want to maximize battery life, and the strongest GPU if you want to maximize gaming performance. The gap between Haswell and Skylake is irrelevant as far as gaming is concerned, while the difference between a GTX 970M and 960M is much large

The world needs true geniuses now more than ever

Does a blog post look better with a featured image?

A lot of white space makes a design look professional